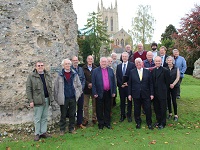 One of the most important milestones in the unique history of Bury St Edmunds is to be marked with a series of millennium celebrations. In three years’ time, it will be exactly 1,000 years since the foundation of the Benedictine Monastery in Bury St Edmunds by King Canute.

The Monastery went on to become the Abbey of St Edmund and housed the body of the martyred 9th Century King of East Anglia, St Edmund. For hundreds of years pilgrims from throughout the world came to worship at the Abbey in veneration of St Edmund, the then patron Saint of England. The Abbey grew in strength and wealth until the dissolution of the monasteries by Henry VIII in the 16th century when it was dismantled and fell into ruin.

Now the Abbey of St Edmund Heritage Partnership has announced that it is preparing to organise Millennium Celebrations in 2020. It aims to establish a steering group to include representatives of Bury St Edmunds Town Council, West Suffolk College and local schools as well as several existing partners to start discussing ideas and planning events.

The Reverend Canon Matthew Vernon from St Edmundsbury Cathedral, chairman of the Heritage Partnership, said: “One of the main reasons why the partnership has been set up is to help the public’s understanding and enjoyment of the ruins of buildings that once played such a prominent role in everyday life in the town. We want to work with schools and other local groups to organise a series of community based events which will celebrate the 1,000th anniversary of the Abbey of St Edmund.”

Scenes from the town’s history were acted out by local residents and school children in pageants in 1907, 1959 and 1970 to celebrate the significance of St Edmund and the Magna Carta. They culminated in the very place that Canute founded his Abbey, The Abbey Gardens.

Martyn Taylor, a local historian and chairman of the Bury Society is part of the Heritage Partnership. He said: “The foundation of the Benedictine Monastery in 1020 AD, alongside the historical accounts and the legends of King Edmund, are linked to the gathering of the Barons in the Abbey in 1214 when they swore to force King John to sign the Magna Carta. These are three pinnacle points not just in the rich heritage of Bury St Edmunds but in the town’s wider importance in English and indeed in international history.”

Only last month, the Heritage Partnership announced the launch of two studies which will run from now until autumn 2018. A Heritage Assessment will bring together all the historical and archaeological information about the Abbey of St Edmund, and a Conservation Plan will then help direct future work to conserve the existing Abbey ruins, and interpret more of the Abbey story.

Cllr Joanna Rayner, St Edmundsbury Borough Council, Cabinet Member for Leisure and Culture said: “There are many intriguing and fascinating stories behind the town that we all know and love. The idea is to tell the story of the Abbey in a way that involves and engages the local community. We know that local people love where they live, and that our heritage captures the imaginations of tourists who enjoy returning to West Suffolk time and again. I’m sure that these celebrations will live long in the memory.”

The Abbey of St Edmund Heritage Partnership is led by St Edmundsbury Cathedral in collaboration with St Edmundsbury Borough Council and representatives of Suffolk County Council, Historic England, English Heritage, the University of East Anglia, the University of Suffolk, the Bury Society and several local community groups as well as specialist architects, historians and archaeologists.