Mystery and intrigue at the Abbey 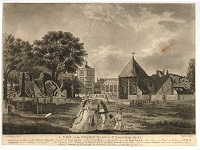 From the grisly account of the hands severed from a Duke dug from his grave, to the involvement of the master of ghost stories, the heritage of the Abbey of St Edmunds is full of mystery and intrigue.

The Abbey of St Edmund Heritage Partnership commissioned Richard Hoggett Heritage late last year to carry out a heritage assessment that will bring together all the historical and archaeological information about the Abbey.

Dr Hoggett has been looking at historical documents as well as LIDAR images – laser scans taken from a light aircraft on behalf of the Environment Agency, which can detect the smallest changes in surface height and which may give more clues as to what lies beneath.

“I used to work next to the Abbey but even I hadn’t appreciated the full complexity and scale of the site. It has been really interesting to find accounts of archaeological investigations on the site going back to the 18th century and beyond. We’re starting to piece together a very interesting history,” he said.

Among those tales is the story of Thomas Beaufort who was the half brother of Henry IV, and held the titles of Earl of Dorset and Duke of Exeter.

Having fought as a soldier in many battles including the Battle of Agincourt, Thomas Beaufort died in 1427 at the age of 52, and was buried next to his wife in the Abbey.

Some 350 years later, with the Abbey in ruins following its dissolution by King Henry VIII, workmen were breaking up part of the old church when they found a lead coffin. The body found inside – later discovered to be Thomas Beaufort - had been so well preserved that even the colour of his eyes was still distinguishable.

The workmen promptly sold the lead from the coffin while local surgeon Thomas Ghery Cullum, son of the Suffolk baronet, cut Thomas Beaufort’s skull into fragments and chopped off his arms below the elbows. Eventually these hands were presented to the Royal College of Surgeons to display in its museum.

“Quite why he did this is unclear but as far as we know the rest of Thomas Beaufort’s body was reburied at the site,” said Dr Hoggett.

MR James is best known today as one of the masters of the English ghost story but prior to his success as an author he had already gained recognition as a respected medieval scholar. Through his own research, James had identified where he believed the final resting place of the abbots would be, and in 1903, he was proven right when the bodies of five abbots were uncovered. Among them Abbot Sampson who was said to be one of the last to check on the body of St Edmund and whose crozier – a staff of office, is now exhibited at Moyse’s Hall Museum.

The work of Dr Hoggett is still ongoing and more updates are expected to be revealed in the coming months. If you are interested in heritage then there is a chance to find out more about four sites in and around Bury St Edmunds later this month. 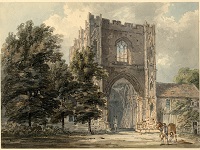 Piecing Together the Heritage Jigsaw is a one day community workshop which will discuss projects at The Guildhall, Moyse’s Hall, West Stow and The Priory Hotel. It has been organised by the Heritage Partnership and takes place on 24 February from 10am to 4pm at the Unitarian Meeting House in Churchgate Street. Tickets are available through The Apex on 01284 758000 or visit http://www.whatsonwestsuffolk.co.uk

The Abbey of St Edmund Heritage Partnership is led by St Edmundsbury Cathedral in collaboration with St Edmundsbury Borough Council and a number of other local and regional public, private and voluntary organisations.

Reverend Canon Matthew Vernon, chairman of the Abbey of St Edmund Heritage Partnership said: “This study and the Conservation Plan that will follow is all being carried out with the aim of furthering public understanding of the life and times of St Edmund and the Medieval Abbey and to encourage people to experience the spiritual, historical and archaeological significance of the Abbey of St Edmund in the modern world.”

Cllr Robert Everitt, St Edmundsbury Borough Council’s Cabinet Member for Families and Communities said: “We want to better understand and protect the Abbey of St Edmund for future generations to come as well as to better explain its significance both to local people and the many visitors.”

The evidence gained from the results of these studies is also likely be used to apply for funding for future projects that will both help preserve the Abbey and help to widen public understanding of its significance.