West Suffolk goes to the polls for European elections 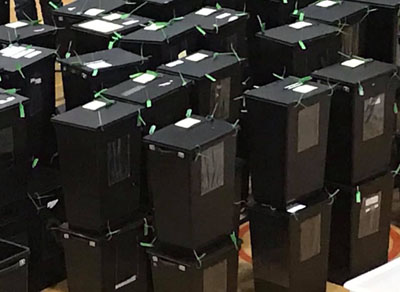 Polling arrangements in West Suffolk are all in place for European elections next week, following Government confirmation that they will be going ahead. All 131 polling stations in West Suffolk will be open from 7am to 10pm on Thursday 23 May. Voters registered to vote in the West Suffolk council elections on 2 May do not need to register again. Polling cards have been sent to all voters confirming their chosen method of voting (at which polling station if voting in person, or by post, or by proxy).

Voters will notice differences to the 2 May council elections. The European elections use proportional representation voting system and seven MEPs will be elected for the Eastern Region. The Eastern Region includes six counties (Suffolk, Essex, Norfolk, Cambridgeshire, Hertfordshire and Bedfordshire)

There are eight parties standing for election, and one independent candidate. Each party can name up to seven candidates they want to see elected. Electors cast a single vote for their party of choice - not for candidates, (apart from the one independent on the list). The full list of parties and candidates is published on the West Suffolk website at www.westsuffolk.gov.uk/elections

Candidates are allocated seats according to the proportion of the votes cast. In the last European elections in 2014, three conservative MEPs were elected, three UKIP and one Labour.

The UK goes to the polls on a Thursday, but some European countries vote at the weekend. This means the West Suffolk votes will be verified immediately after polls close, on Thursday 23 May, but won’t be counted until 5pm on Sunday 26 May. The numbers of votes will then be sent to the regional headquarters in Chelmsford, where they are combined with all the region’s other votes to give a result.