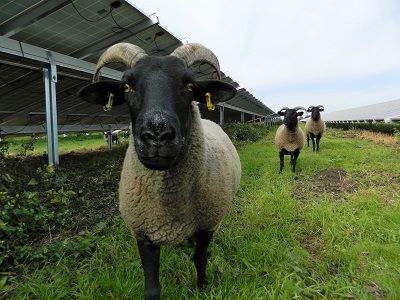 It’s World Environment Day and West Suffolk Council’s solar farm has just recorded its best month so far in terms of the amount of renewable energy it is generating.

The 12.4MW solar farm at Toggam Farm in Lakenheath, one of the largest council owned solar farms in the country, plugged in back in August 2016.

Since then it has been generating renewable electricity, sold to the National Grid, and alongside it income to help fund day to day council services.

May saw it produce 2007MWh of electricity – its best performing month so far. That is the equivalent of powering 600 homes for an entire year. There were periods in May where 65% of the country’s power demand was being generated by renewable sources.

The sunny weather has seen the solar farm produce 27% more electricity than forecast for April and May, bringing with it £411k of income.

Over the last three years the amount generated by the solar farm has created more than £4million of income which after costs, has meant more than £1.2m has been pumped into public services.

The solar farm is just one of the many ways that the council is helping the environment and making financial benefits for the public purse.

At West Stow it has installed a 117kW ground source heat pump providing renewable heat and cooling to replace an oil and electric heating system for the café, museum and collections buildings. The project achieves both environmental and financial savings.

Cllr John Griffiths said: “Our environment is crucially important to us all both now and in the future, and while many of us have been working from home these past few months, our work to deliver on carbon savings, cut pollution, and generate income to pay for day to day services for residents and businesses across West Suffolk, is ongoing.

“In addition to our solar and ground source heating initiatives, we continue to monitor and take action on pockets of air pollution, as we have done recently in Great Barton in partnership with the county council, through the movement of a pedestrian crossing. Other partnership work including improving electric vehicle infrastructure and reducing anti-idling had already begun prior to the lockdown restrictions and I look forward to this continuing as soon as is practical.

“Friends of the Earth, named West Suffolk as one of the top areas in the UK for tackling climate change and supporting the environment late last year. Of course there is more to be done which is why recognising and celebrating World Environment Day is so important.”