Your views needed on better rail service to Cambridge 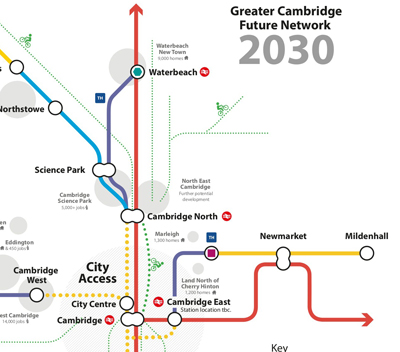 West Suffolk residents, and in particular those travelling to Cambridge from Bury St Edmunds and Newmarket, are being asked to comment on Greater Cambridge Partnership’s proposed transport improvement options for people accessing Cambridge from the east.

Referred to as the Cambridge Eastern Access project, Greater Cambridge Partnership (GCP) is consulting on five options, including improved rail services on the Bury St Edmunds and Newmarket to Cambridge line which could see a twice hourly service instead of the current hourly service. The consultation, which is open until 18 December, is an opportunity to comment on options proposed. Option B3 is of particular interest as it references the long term rail opportunity which could include new and re-opened train stations, as well as more frequent train service on the Cambridge to Ipswich line.

West Suffolk is part of Cambridgeshire’s housing market and travel to work areas.

"I am pleased to see that Greater Cambridge Partnership is focusing on improving transport to the east of Cambridge. It is important to recognise that traffic congestion originates much farther out than the Cambridge eastern access area and, consequently, the impact of trips from West Suffolk should be considered. It is important that anyone who travels to and from the east of Cambridge and has an interest in rail services has the opportunity to take part in this consultation."

"It is evident that the current hourly service is not a robust alternative to car. Increasing the service to half hourly is a long standing priority being advanced by East West Rail Eastern Section Executive Board with support from the East West Rail Consortium.

"It is also recognised in the Cambridgeshire and Peterborough Local Transport Plan and Network Rail’s Anglia Route Study.

"What the Greater Cambridge Partnership is proposing helps the eastern section business case in bringing a sustainable travel option for the wider economic area, and I encourage anyone who travels to Cambridge to take part."