How ordinary people created the cult of St Edmund 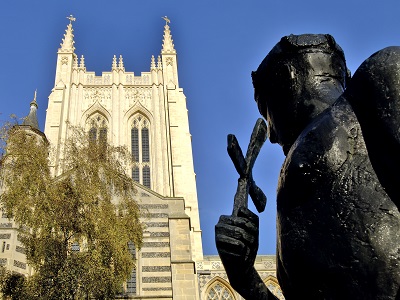 How did Edmund go from being a defeated regional king to the patron saint of England and why did a Danish monarch decide to build an Abbey in his honour?

These are the themes behind the latest in a series of free, online talks, to mark 1000 years since the founding of the Abbey of St Edmund in Bury St Edmunds.

“The way the Abbey of St Edmund came into being, compared to all of the other medieval Abbeys in England, is quite possibly unique in that it seems to owe its origins to the ordinary East Anglian people,” said historian Professor Sarah Foot, the Regius Professor of Ecclesiastical History at the University of Oxford.

“Edmund had been king of East Anglia before his death in 869; in 890, just 20 years later, we have coins minted locally bearing the name St Edmund. Local people had made him their saint very soon after his death. We also have records of generations of families across Suffolk, Norfolk and Essex making gifts of land to the church in honour of their fallen king. And so the cult of St Edmund was born.

“All this makes Bury St Edmunds highly unusual among early medieval abbeys in having no royal foundation charter; it seems to have been established from the bottom up.”

But while their love for their fallen king saw people donating land to the church, the motivation of King Cnut or Canute for founding the abbey may not have been so altruistic.

“We know Cnut, who was Danish, took a particular interest in St Edmund. After he had defeated Edmund Ironside in 1016 he became King of England and it may well be that the re-foundation of the church of St Edmund as a Benedictine Abbey was made in reparation for the ills perpetrated by his Scandinavian forebears,” said Prof Foot. “Was he looking for a saint whose banner would make him more popular with the English? Did he help turn Edmund from East Anglia’s Saint into a national figure as a way to curry favour not just with the people of East Anglia but across England as a whole?”

You can hear more from Prof Foot when she discusses Patrons and Benefactors of St Edmund’s Abbey c.900-1086, part of the From Rise to Ruins series, on Saturday 27 February at 2pm on the St Edmundsbury Cathedral Facebook page www.facebook.com/stedscathedral  You can also watch the video afterwards on the Abbey of St Edmund Heritage Partnership website at www.abbeyofstedmund.org.uk/rise-to-ruins/

The final event in the From Rise to Ruins series, will take place on 27 March 2021 when Professor Mark Bailey will talk about The Abbey of Bury St Edmunds and the History of Suffolk.

The talks are being promoted by the Abbey of St Edmund Heritage Partnership and the Suffolk Institute of Archaeology and History. The talks are free to watch and are supported by the National Lottery Heritage Fund and various local business sponsors. For more information visit www.abbeyofstedmund.org.uk/rise-to-ruins/