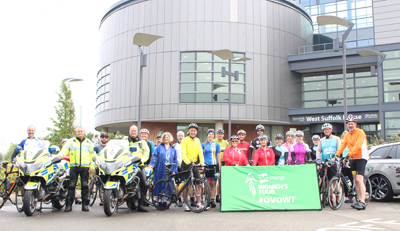 Partners and stakeholders in the Suffolk stage of the OVO Energy Women’s Tour have joined local cyclists and media to sample the final 20 miles of opening stage of the 2019 race.

A group of 22 cyclists, escorted by a pair of motorcycle outriders from Suffolk Constabulary, took on the section of Stage One from Bury St Edmunds to Stowmarket that the world’s top riders will race over in three weeks’ time.

Suffolk will host the first stage of the OVO Energy Women’s Tour for a record fourth time, with Beccles hosting the Grand Depart on Monday 10 June.

Monday’s media ride took place over a 30 kilometre / 20 mile route from West Suffolk House in Bury St Edmunds to the Stowmarket Town Council offices, just beyond the Stage One finish line in Stowmarket.

Passing through Nowton, Felsham and Rattlesden the group got to experience riding in a peloton and the route the professionals will take, including the SKODA Queen of the Mountains climb at Little Whelnetham.

The route also took the group through Angel Hill in Bury St Edmunds, where Marianne Vos famously won the final stage and overall of the first ever Women’s Tour race in 2014.

The OVO Energy Women’s Tour begins in Suffolk on Monday 10 June and features almost 800 kilometres of racing across six stages before the overall finish in Carmarthenshire, Wales.

Once more the race will offer prize money parity with the men’s Tour of Britain, thanks to award winning independent energy supplier OVO Energy, the title sponsors of the Women’s Tour for a third edition.

All 15 of the world’s top teams from the start of season UCI Women’s WorldTour rankings have accepted their invitations to the event, and will be joined by British team Drops to complete the 16-team, 96-rider field for the race, while ITV4 will again screen highlights broadcast at 20:00 in the UK every evening.

Launched in 2014 by SweetSpot Group, the OVO Energy Women’s Tour is widely regarded as the world’s leading international stage race for women. The race attracts 300,000 roadside spectators, in addition to a worldwide television and online audience of nearly five million people.

Last year’s edition provided an £7.8 million economic boost to the economy, with 87 per cent of visitors to the race describing it as “very enjoyable”.