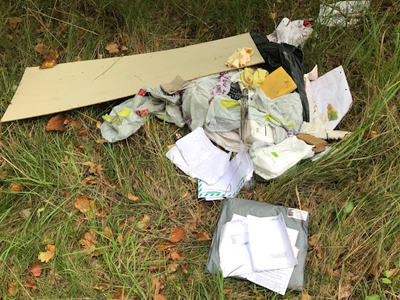 A Suffolk man has been fined a total £1467 in fines and costs after admitting to fly-tipping.

Charles Tirrell from Red Lodge, Suffolk pleaded guilty to fly-tipping and operating as an unregistered waste carrier at Ipswich Magistrates Court on Tuesday the 23 April.

‘This sends a message that we take these incidents very seriously. Residents must ensure that they only allow registered waste carriers to remove their waste. Please ask to see the waste carrier licence of anyone you are using to remove your waste. Note down the licence details and the registration number of the vehicle used to take your waste away. If you are unsure, you can check their details by calling 08708 506506. It is not only fly-tippers who are liable to be prosecuted. Householders can too, if waste removed from their property becomes fly-tipped and they haven’t made these checks’.