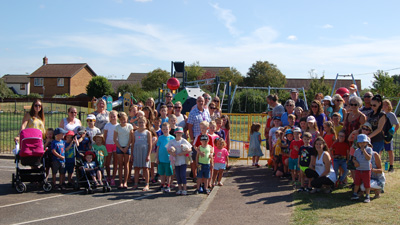 There was smiles and laughter as three year-old Sloane Fairbairn, tried out a new £60,000 play area, before officially opening it for other children to enjoy.

West Suffolk Council has to close Douglas Park in Mildenhall earlier this year after equipment got damaged meaning it was no longer safe to use.

The council has since worked with primary school children from St Mary’s Church of England Academy to select equipment for a new look play area which officially opened on Friday.

Sloane was invited to open the play area after she captured the heart strings earlier in the year when she was seen sobbing at the closed gates to the play area on a Facebook video posted by her grandmother Yvette Head.

She said: “She was so upset that day but the new play area looks fantastic, she was so excited and happy coming here today and I’m sure she will be down playing here on a regular basis.”

Councillor Joanna Rayner, West Suffolk Council’s Cabinet Member for Leisure and Culture said: “We recognise that encouraging children to get out and play is great for their health. They are also places where parents, grandparents and carers can entertain children with a free, fun activity and where the children themselves can use up some of that boundless energy they seem to have. We have so many great parks and play areas across West Suffolk and through a rolling programme, we are continuing to invest in them for children across West Suffolk to get out and enjoy.”

Councillor Andy Neal who represents the Mildenhall Queensway Ward which includes Douglas Park said: “There has been huge excitement and anticipation in the community ever since the design for the new play area was revealed. It is a significant investment which has been shaped through engagement with children from the local primary school. I have no doubt that this play area will be very popular - it looks out of this world. This is a proud day for the local community that I represent.”