Due to the impact of the coronavirus our services are experiencing some delays with turnaround times.

Pre-application advice service: All 30 minute pre-booked appointments and meetings (face to face in the office) will now be changed to telephone appointments or can be held virtually via Microsoft Teams.
Site visit and site meeting options can still be requested, but meetings will be held virtually via Microsoft Teams or over the telephone. Site visits will be outdoors only and will continue to be socially distanced until such restrictions are lifted.

Validating Planning and Building Control applications may experience some delays. Please submit applications online or by email as the processing of paper applications will be delayed.

Building Control continues to operate as a service. Please read the Service changes document before booking a site inspection.

17-18 Cornhill  was announced as one of the first projects to be looked at: 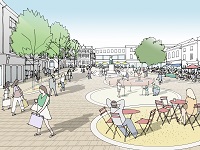 After 20 events held across two periods of public engagement resulting in more than 8000 public comments, and many subsequent amendments, the final version of the Bury St Edmunds Town Centre Masterplan will go before councillors to adopt in December.

The masterplan looks to shape how and where growth will happen in the town centre, to improve where improvements are needed and protect the things that people love best about the town centre.

An issues and options consultation back in February to April asked people to help identify the challenges facing the town centre and how they might be addressed. That led to more than 1,100 responses and nearly 6,000 individual comments.

Public suggestions including pedestrianisation or part pedestrianisation of The Buttermarket and Cornhill were then brought together in the shape of a draft masterplan that looked at different character areas of the town centre and themed the issues around Movement, Activity and Place. That in turn saw 400 responses and more than 2000 separate comments – all of which have now been published online as part of a report to next week’s Cabinet meeting. The online report also contains responses from the masterplan team to each of the public comments.

The majority of public responses were in favour of the proposals for eight of the nine character areas. The one area where the majority of people objected related to the redevelopment of the bus station in St Andrews Quarter and the revised masterplan now includes the improvement of bus access and facilities for the town.

On Tuesday 5 December St Edmundsbury Borough Council’s Cabinet will be recommended to approve that the revised masterplan go to full council to adopt on 19 December.

Read the Bury St Edmunds Masterplan responses report including an appendix containing the comments received during the draft masterplan consultation.

Find out more about the Bury St Edmunds MAP